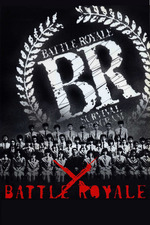 The final film directed by Kinji Fukasaku, adapted by his son Kenta from the novel by Koushun Takami, this is one of the greatest Japanese movies ever made. It's violent. It's bloody. It's controversial. It has kind of had it's legacy ruined by 'The Hunger Games'. But I still think this is a powerful piece of cinema. The cast of young actors (especially Tatsuya Fujiwara, Aki Maeda, Tarō Yamamoto, Masanobu Andō, Kou Shibasaki and Chiaki Kuriyama), as well as the great Takeshi Kitano as the teacher who oversees the deadly game they are forced into, are all well written and performed, and you do feel for the innocent ones that end up losing their lives. The score by Masamichi Amano is really powerful, and the classical music pieces used are worked in really well. A total masterpiece.

Days of the Bagnold Summer