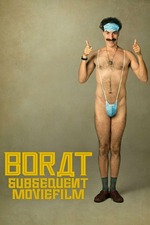 “My disappointment is immeasurable and my day is ruined”

Not really, but is it just me or did this not come anywhere near the original? With the first Borat film, Sacha Baron Cohen wanted to expose the deep seeded racism in America, but unfortunately since the release of the first Borat, that racism has made itself broadly known. So instead Sacha Baron Cohen opted to try and expose the humanity of America during a highly contentious time. This leads to some heartwarming moments for sure, but didn’t make for good comedy necessarily. Borat 2 has a much more concise story then the first one, along with broader themes of feminism and acceptance. That would be fine, however it absolutely takes away from the comedy for me. Not to say there weren’t any funny scenes, but all of them took place in the first half, in the second half the film tries to wrap up a story and forgets about the comedy. I didn’t laugh once in the second half of this movie. It also felt much more toned down compared to the first one. People are calling this movie super extreme and controversial, and I’m over here like...are you joking? To me this felt super sanitary and inoffensive barring one or two scenes. During the film I felt acutely aware of how much our media has changed since 2006 in the way it scrutinizes the content of a film. Because to call this extreme, especially compared to something like the first Borat, let alone Bruno, does not make sense to me. Then again, everyone has a different tolerance of offensive content which I totally understand. That’s not really my only issue though, I have one that I’ve seen no one else mention. Sacha Baron Cohen...something seemed off. It was more like someone doing a really good Borat impression rather than Borat himself if that makes sense. Something just really seemed off with his performance. I don’t know if it’s just because he has aged 14 years since the first movie or if it has to do with the director switching between films. I think the most likely reason for the performance disparity between Borat 1 and 2 is the overall narrative structure. Let’s face it, this movie was made as one big middle finger the the Trump administration. As funny as this may sound in concept, Cohen and the filmmakers want to make damn sure you know what their political beliefs are. It’s not NEARLY as subtle as the first film. It ends with “now vote” for gods sake. Now I’m not critiquing the concept by any means, but by forcing in this messaging it takes away from the subtle and demented comedy of the first film and the Borat character as a whole. This affected every aspect of the film right down to the performance from Sacha Baron Cohen. Now there are a few positives like I said, there are some genuinely hilarious scenes and I thought the girl that played Borat daughter did a great job. But overall I’m pretty disappointed. Azamat deserved better.

P.S I’ve decided to raise my score for Bruno after watching this.