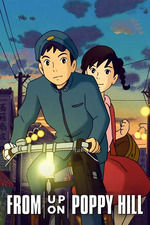 From Up on Poppy Hill

Easily Studio Ghibli’s weakest film. This was super fucking boring. Cringe worthy dialogue, dull characters, juvenile humor, a plot that is so fundamentally uninteresting that it made me frustrated that it was made by the same company that strives on making movies with the most creative, interesting, zany plots imaginable. From a story perspective this feels like it was made by another company trying to rip off Ghibli. I started watching the English dub but had to switch halfway through to Japanese with subtitles because the dub was so poor performance wise, but switching languages can’t help awful dialogue, in fact, with subtitles you can really grasp how bad the dialogue in this movie is.

Now this is a Ghibli film after all which means you can expect some jaw dropping animation and cinematography. You can also expect a really great score, which when all was said and done was my favorite aspect of the film. If you put this same score in a better film it could be iconic. Still despite these positive this film was a giant let down.