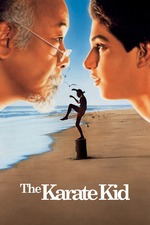 I am behind on logging films by a couple of days so bare with me if I’m spamming anyone’s inbox or if my reviews suck.

Ok, The Karate Kid. What a fucking awesome movie. I was expecting it to be over the top and cheesy to the point where I wouldn’t like it, and it certainly is over the top and cheesy, but I really found a lot of heart with it. The relationship between Daniel and Miyagi, The relationship between Daniel and his mother, the relationship between Daniel and Ali, all of these felt SO real. You really grow to love these characters. And the ACTING, everyone is fantastic and charming in the movie. Elizabeth Shue and Ralph Macchio have fantastic chemistry and absolutely feel like a real couple. William Zabka and Martin Kove are great villains. But the standout is Pat Morita as Miyagi. I think it’s safe to say the performance and character are legendary at this point. The cinematography and direction is also beautifully done. My only complaint is the ending, not the karate competition itself (that was awesome), but the actual cut to credits. It feels really abrupt. I wish there was one scene after the competition to wrap up the story a little smoother. This film deserved it. I guess thats what Cobra Kai is for (I’ve only watched the first episode, but it’s good so far.) So yeah, all and all I think The Karate Kid is fantastic. It’s a classic for a reason, and I would absolutely recommend it if you’ve never seen it.