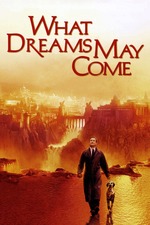 What Dreams May Come

We watched this in my film lit class to examine how color is used in film, and yeah, this is a visually stunning movie. The themes of heaven and hell were gorgeously portrayed via color pallet. Weather it be the light, vibrant and colorful heaven or the dark, seedy underworld. The films cinematography is perfect and the colors bounce off the screen. I can see why, and appreciate why, my teacher chose this film for our color and cinematography unit. Aside from that though I really found this film kind of boring, and tonally inconsistent. I never really got attached to any of the characters, which is problematic because the main emotional crux of the film is the relationship between the two leads. I also found that the tone bounced around a lot sometimes the film would go for a cheesy, sappy, whimsical tone, but then it switches to a tone that was TOO dark and depressing for the films good, and than it switched back again. Because of these things I just found it hard to care. What I will say though is that Robin Williams gives a beautiful performance here. I’ve never really got a chance to say it here on Letterboxd, but Rest In Peace man, that guy is one of the best actors of all time as far as I am concerned. He and the cinematographer pretty much carry the entire film on their backs. I can say for certain that I would’ve liked the film a lot less if Robin Williams wasn’t playing the lead.

So yeah, in conclusion this movie disappointed me. My teacher built it up as some great masterpiece, and it’s actually one of my dads all time favorite films. So I was personally expecting a little bit more out of it.