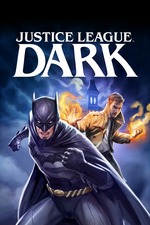 Another quite good installment to the DCUAO (DC Universe Animated Originals). In this one, Batman teams up with John Constantine, Zatanna, Etrigan, Boston "Deadman" Brand, and the Swamp Thing to take on ancient magic that is driving people insane.

As the name implies, this gets a bit dark. Not as extreme as The Flashpoint Paradox, but this definitely has a kind of dark magic / horror vibe to it, with monsters, possession, murder, suicide and demons. It's a good one though. A lot if interesting characters, and DC know how to handle their magic - by making it powerful, dark and badass. John Constantine is a great British bloke with an attitude, and Zatanna is voiced by none other than Camilla Luddington, who voiced Lara Croft in the two most recent Tomb Raider games. Alfred Molina lends his voice to one of the major bad guys.

This has an interesting dark plot, tons of fantastic animation and action, and a good assortment of characters. Perhaps Batman wasn't the ideal character to bring along for the mission, but he has his moments too. The ending feels a bit busy though, because it has a "villain on top of villain on top of villain" structure that is a bit tiresome, how many potential villains can you reveal in the span of 75 minutes? Despite that this holds up well, and if you are interested, I'd say it's well worth having a look at. It has actually sold me on the idea of a live action Justice League Dark movie, which is already officially in the works.