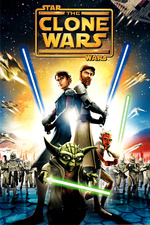 When it comes to Star Wars I'm a lifelong fan and I have seen pretty much all there is to see, down to the dreaded 1978 Star Wars Holiday Special. But there is only one part of the visual story I haven't delved into yet - the animated shows. To me they always felt like the "lesser" part of the overall puzzle if that makes sense. Inessential, not really canon in any major way that matters, and the animation looked pretty wonky too..well, I'm finally going to set my predetermined notions aside and check it all out: this animated movie, the seven season of The Clone Wars, the four seasons of Rebels and the most recent, short-lived Resistance show.

Set right after the events of Attack of the Clones, the Clone Wars are in full effect and Anakin and Obi-Wan are tasked with retrieving Jabba the Hutt's kidnapped...son (yes, really). On the way Anakin takes on a Padawan of his own, the young Ahsoka Tano, just as willful as he once was, and they have to face off with Count Dooku's own apprentice, Asajj Ventress.

This was perhaps not as terrible as I had feared, it's at times fairly decent as an animated Star Wars action adventure movie, but again, I still have this strange feeling of..was this really essential? When it comes to the movies I'll sit through them all and appreciate something about all of them: the originals, the special editions, the prequels, even the Disney movies. There is something about them all that clicks into place and forms a bigger narrative whole, but here we suddenly have..a Padawan teaching a Padawan? Conveniently we never heard about Ahsoka before or since - where was she during Revenge of the Sith? (I think the show eventually answers that toward the final part of the last season, and I think it basically boils down to "she was in different rooms than Anakin and Obi-Wan every single time, and they conveniently forgot to mention her!" Yeah right).

The animation is indeed a bit wonky. This was made 12 years ago, but I think it's just the overall style that doesn't click with me...it's like they weren't completely going for a realistic style but they didn't really go completely "animated" either so you are left with this very odd, clunky look and "fixed position" movement for everyone and it could've been a lot better. It works in telling the story but that's about it.

There are still some positives though, it wasn't too difficult to sit through overall. The story moves like a bullet, with plenty of action sequences to enjoy. Most characters have new voice actors but Samuel L. Jackson, Anthony Daniels and Christopher Lee returned to voice theirs at least. The music works well enough even though it isn't always going for a "John Williams feel".

On the whole this was almost exactly what I thought it would be: it is by no means horrendous but as of yet I just don't feel like this is even remotely "canon" to me. It feels like George milking the old cash cow for all it was worth, introducing sideplots and characters that weren't really necessary. Hopefully I will eat my words by the time I watch the full shows, as I understand they fill in a lot of "gaps" with memorable characters and storylines of their own, but so far it's probably the closest thing I've seen to something akin to Star Wars fan fiction. Decent enough at times but not much more than that. (And if you're about to comment "bUt rOBiN, tHe DIsNeY moVIeS wErE ThE reAL sLoPpY fAN fICtIoN!" you can save it, I've heard it all before and I don't care).