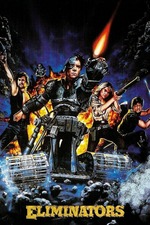 The modern movie audience is used to team-up flicks every few years with Marvel pushing out flicks like a litter of kittens. In the 80s that kind of thing, well it wasn't a thing. Then came along Eliminators. Imagine every action flick stereotype teaming up. An R2D2 knock-off, the brainy scientist who is also the hot girl who would later be better known as Tasha Yar, Terminator with tank treads, Han Solo but a boat driver (he ain't a captain, folks) and a friggin NINJA. Decades before Sylvester Stallone decided to raid the retirement homes for action stars Chuck Band produced a flick that features a super b-movie action team. This is equivalent to the name power of Traveling Wilburys without the name power.

Eliminators is the perfect kind of flick. Strong on adventure and high on bizarro world action. This doesn't take itself too seriously, thankfully. There are a few moments when they make reference to how ridiculous this team of mismatched heroes is. I also couldn't help but think of Star Trek: TNG season 1 episode 3 when Data and Tasha Yar got it on. Sorry Data, Tasha Yar has a thing for android/cyborgs and you weren't her first android/cyborg.