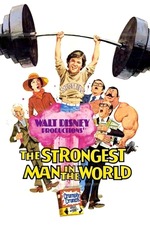 The Strongest Man in the World

Not as good as The Computer Wore Tennis Shoes, but still has it’s humorous moments and performances. It seems like Joe Flynn’s Dean Higgins has taken over as the main character rather than acting as the academic heel and second banana to Kurt Russell’s Dexter Riley, while William Schaellert’s Professor Quigley hardly has anything to do in the film. It is nice to see the characters of A.J. Arno (Cesar Romero) and his henchman Cookie (Dick Bakaylan) back for more action. They provided some of the biggest laughs of the movie.

Unfortunately, there was a rather racist scene involving Dexter’s friend Schuyler being given acupuncture in order to brainwash him in the back of a Chinese restaurant by a mysterious man named Mr. Ah Fong. And even if the character and the situation weren’t played as stereotypes, the scene still would serve no point. The gangsters got the information about what gave Dexter his super-strength, but it didn’t end up working and it left evil cereal magnate Phil Silvers with a broken hand. Don’t ask! You have to watch the movie.

Otherwise, although not necessarily needed, it’s a pretty good sequel! I got some laughs, I watched Kurt Russell lift stuff, Eve Arden and Dick Van Patten’s bickering made me chuckle, and I enjoyed myself, apart from the brainwashing scene. Now all I have to do is watch Now You See Him, Now You Don’t.