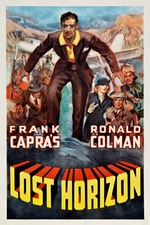 ”When the strong have devoured each other, the Christian ethic may at last be fulfilled and the meek shall inherit the earth.”

Whenever I watch a picture by Frank Capra I am swept away by a genuine belief in human kindness. What would otherwise come across as intolerably sugarcoated strikes me as heartwarming and inspiring. He was optimistic without being gullible. His films often reinvigorate my own belief in our common proclivity towards good and compassion – a conviction that at times seems completely unconceivable. Against that background, the idea that Frank Capra once directed a picture about a utopian community wherein mankind was gentle seemed appropriate. The issue is that the cinematic utopia that Capra erects, apart from being a dull setting that offers little surprises and is marred by a white-savior complex, is more analogous to a dogmatic hierarchical prison than a magical El Dorado. Hence, the narrative fails to entertain or to inspire.

The long speech given by the candlelight delivered by the High Lama, for example, rather than being moving is instead perverted by a deeply disturbing cultish undertone. Concerning the characters, the same have no depth (this is particularly true for the female characters – Gloria literally could be cut from the film). Lovey and Barnard are third-rate comic relief and the protagonist is passive and faces no real conflict until the very end when he is forced to make a decision (stay or leave / believe or doubt). Nothing drives the plotline forward which makes “Lost Horizon” (1937) insufferably languid – it is unbelievable that the film is so long despite its actionless narrative.

All About My Mother