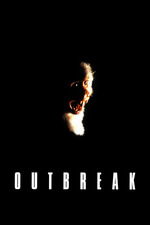 This is a movie about a virus, which is to say a movie absent a visualizable antagonist, so I very much appreciate the visual acuity Wolfgang Peterson instills in a narrative that principally consists of people in encapsulated military hazmat suits hurrying from one place to another. One person gets infected by imprecisely using a blood sample centrifuge, which he seems to administer in the same way you would if you tried to stop a table fan with your hand, and infected blood splatters all over his face. Another goes to a crowded movie, and when he coughs the POV follows the path of the cough, Evil Dead-like, until it's inhaled by a few of the other patrons. This initiates the outbreak of the title, at which point the movie becomes more of an action enterprise than you may have expected. This engenders a slew of great scenes, which include helicopter chases, exploding cars, and missiles. But my favorite part, repeated more than once, is when one of the doctors caresses the helmet of one of his colleagues because he can't touch the person's face.