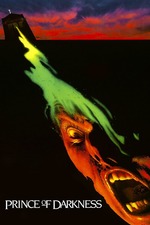 This is a movie about an impending apocalypse, which only a handful of graduate students in theoretical physics are capable of fending off. Regarding those graduate students, the film does a pretty good job of skimming the surface of what I assume is their unsummarizable field of study, which is to say it’s not long after one of those conspicuously attractive graduate students is saying something or other about how one theory assumes the existence of a supreme being or whatever before actual ghouls start emerging from the shadows, which is John Carpenter’s way of saying that that theory, incidentally, is correct.

Taken as a horror film of the sort in which a team of people combat some otherworldly force, this is full of cliches and almost totally predictable. But it’s nevertheless great, propelled by one of Carpenter’s more pervasive scores — maybe less than ten minutes of this are absent any music? It’s so constant it’s as though you’re watching the movie enveloped inside a thumping heart — and the performances are decent even if there’s not a single memorable character apart from Donald Pleasence and Victor Wong who play much the same characters they played in Halloween and Big Trouble in Little China, respectively. I’m of the mind that this isn't only OK but preferable.