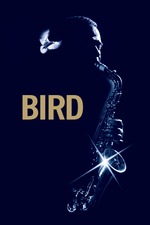 Bird drifts inconclusively but seductively, never fulfilling its promise but succeeding as one of Eastwood's most delectable directorial efforts.

A jazz musician characterisation, particularly one who leads the bop charge amidst an unruly existence, is often pulled between jazz cool stability and odd hour industry, and the edgier expression and indulgence of an archetypal tortured genius; the prickly, unreliable victim who finds solace and insular purpose in his musical voice. Charlie seems tragically self-aware of the closing in fate of his lifestyle, but at the same time he amiably engages through the melodic sweetness and drifter lonerism of a prince in exile (or a court songbird) constantly fighting the recurrences of drab days and bleak nights, a thematic combo present in much of Eastwood's work. Eastwood explores this atmospheric headspace through the curiously coloured combination of vintage Eastwood beige and deep mood indigo. Bird is a classic case of quickly forgotten earnest Eastwood, but as with many of his better efforts it never bores thanks to a flurry of particular character moments that sing memorably, whilst the various precious romances, bromances, addictions, vigilances and rivalries (and loving nightclub recreation) which flit in and out of Charlie's planet keep viewer exhaustion at bay.

What makes Bird something worth watching is the rise to attention performance of the ever enigmatic dignitary Forest Whitaker. He is in hindsight a perfect fit for such a role type, a substantial physique housing a sea of intense quiet with a jagged, nervy edge that can be equally pivoted towards charm and terror, and this notable early lead role which made his name remains one of his most definitive and compelling. He evokes the feeling of an irrepressibly creative force trapped out of time, whose richly guiding soul came first and his preservation of life rescinded.

Romantic, passionate and mournful, Bird does justice to his legacy and explores with affectionate bedside understanding (not dissimilarly to the risky but successful show-not-tell approach of Mr. Turner), but offers up little in the way of advice or analysis and for some will sail away fatally indistinct. Bird might lack confident coherency to justify the bulging waistline of the runtime, but such a fault need not upset the cart in the realm of the musical biopic, and particularly in the case of an elusive jazz musician (even if it invites the non-linear scrappiness of the final canvas) can even work in its favour. Where Bird falls short is where the meandering yet involving labor of love persuasively fills in. A beautiful tribute.