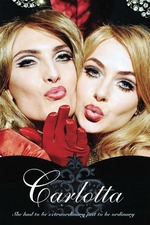 An ABC biographical telemovie on the titular trail blazing Australian transsexual showgirl Carlotta, from the 1950s through to the 1990s.

Honestly, this was better than I was expecting and really packed an emotional punch. It goes fairly easy on Carlotta, it's hardly a warts and all representation, but nevertheless it's a very inspiring and charming feature on a pioneering woman, who straddled both the Les Girls cabaret and transsexual worlds, and helped inspire films such as Priscilla, Queen of the Desert.

Jessica Marais is stunning in the lead role. From being unbearably cute in boy mode early on to the confident Carlotta we see later on, she reminded me a lot of Kim Cattrall. It's not exactly a knock out performance, but Marais hits all the right notes and really brings it, showing there is more to her than Packed to the Rafters. The rest of the ensemble are all well cast, hell, even Paul Capsis shows up to give the production a stamp of glam approval.

The story itself, partly embellished, communicates a lot of the transgender experience rather well, and sheds light on an earlier era, particularly the 70s. Like Priscilla, it shows you can blur the drag and trans* worlds and still keep your authenticity and integrity intact.