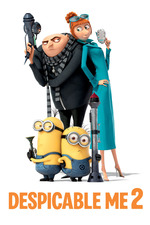 Enjoyably entertaining to an extent, but even more unfocused and guilty of narrative negligence than its predecessor. It is frustrating to see a franchise ignoring valid criticisms and degenerating ever further.

Still, there are enough clever strengths littered throughout this product to distract from the widening problems at hand. There are always countless sugar hits and brilliant gags to gobble up whenever the film threatens to lag or collapse, and as a bigger and louder sequel there are many worse examples. Whilst I despair at the middling results these films continue to pursue in escalating fashion, given the clear talent and wit which suggest higher potential, the subtle pleasures on offer are still refreshingly enjoyable when I think back to the pop culture reference byproducts that flooded the marketplace in a feeding frenzy after Shrek (Shark Tale remains one of my least enjoyable cinematic experiences to date). Such references still exist in the likes of Despicable Me 2, but are less overt and often sidelined to the Minion sideshow (you know, those moments when you can check your watch, grab a cuppa or every once in a while laugh uproariously).

Unfortunately for the overall quality of these films, the ever-flimsy Minions increasingly hijack the main plot for mere cash bonanza. I will not be sticking around for Minions. It is a shame how uninterested Despicable Me 2 is in being a great film, as it can quite easily attain such results with more purpose, cohesion and ambition. Ultimately, this is a throwaway affair which falls short of the original, despite continuing to bring the charm. In a way I continue to admire the ongoing attempts to turn madcap distractionism into a dignified artform in itself, but it hasn't delivered yet with any sustenance, only undermining an otherwise reasonably talented animation house.