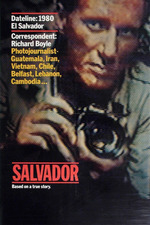 Salvador is one of the films I've watched most regularly since my early teen years.

Often, when revisiting youthful favourites, you make an epiphanic discovery that it is down to something like an excellent cinematography, score or use of montage. Here, I was shocked to see how gorgeous the cinematography stands up, from none other than Robert Richardson (his first DoP credit), considerably elevating an otherwise scungy, guerilla Stone breakthrough. Salvador isn't a film you remember as having excellent cinematography, except it actually does. Similarly, I was struck this time around by the cinematic influences, particularly agitprop as far back as Eisenstein, which really brings many of the political, action and crowd sequences to life.

The camera as masturbatory cinematic handheld is also intriguing, as here it is employed similarly to the gun. War correspondent photojournalists Woods and Savage might as well be carrying a handgun, as they find themselves in many similar poses; being arrested for carrying, contraband, enemies of the state, sniper shutter, the presence in scenes of massacre, the sweaty, bloody clutch during battle shootouts, the fame-making selfies in uncharted territories, and how seeing through a lens reveals some things but hides other things. They snivel amidst instability, stalking the brink, hawking murder, exporting vision to foreign press, uncovering detailed realities and absorbing local feeling behind the propagandic prose. Boyle has seen so many broken dreams and proxy cadavers that governments and their backers bleed specificity and are merely seen for what they are, always were, and always will be.

Lastly, Joseph Conrad's Nostromo (itself inspired by the US role in Panama) would have to be one of the most definitive, prophetic novels of the 20th century. Nearly a century later, films such as Salvador might as well be adaptations of a kind. The various forces at play are so eerily identical, from regime instability to banana-economy oligarchy to imperialist exploitation to religious/banditry alliances to Pacific coastlines to marked-man journalists to all-pervading corruptibility, even down to the historical myth-making of cavalry charges.

Salvador stands up beautifully as something like Eisenstein meets Conrad, with some Reaganism and buddy road-trip thrown in. My parents loved this in cinemas, and I remain indebted to them for introducing me to this on Father's Day 2003. I love all of Stone's directorial choices (a lot of which couldn't be replicated without the dodgy production circumstances at play), and the rest of the crew including the editor, composer, cinematographer and casting director do really fine work which hindsight has overlooked given how Stone is lionized as towering auteurly over his films. The beautiful montage that is the southbound road trip feels laughably brief to me now, as you get the impression the drive is done in an afternoon or something whereas driving from San Francisco to El Salvador would take like four days minimum. But don't let distance get in the way of a good vibe.