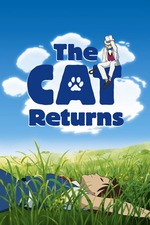 So this is what Ghibli on a rudimentary day looks like.

Breezy fun that starts simple and gets a little weird, whilst also thematically confronting fairly tale illusions and neuroses, but ultimately it's an average, somewhat limited film in a stable of classics which are anything but. Such cruel comparisons inevitably lead to this film being grossly overlooked, but it is certainly an afterthought.

The Cat Returns does convince as a wacky (and increasingly silly and wicked) cinematic evocation of those much heralded and skewered feline tendencies, whilst at the same time serving yet another juicy Alice in Wonderland coming of age journey from Ghibli of a dreamy girl whisked off into a (progressively dastardly) magical adventure which bursts the bubble on some of the wandering daydreams and structured perceptions of her childhood, allowing her to conclude as a more practical, engaged, grown woman.

Is Ghibli capable of a bad film? After the humble diversion of The Cat Returns, the question remains unchanged (I am yet to see Tales from Earthsea). If you randomly stumbled upon this with no expectations, you would be rather charmed, and it certainly beats a lot of the soulless vacuity churned out by western studios which parents are often subjected to. Deserving of a small but fond fanbase, The Cat Returns has much to enjoy and appreciate, but as a complete package it is certainly no world beater.