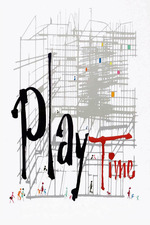 At first I was hesitant, due to the lack of a traditional narrative. But I was slowly drawn in through the gorgeous buildings, the meticulously planned actions, and the energy of the cast. There were so many characters to love—the waiter with the ripped clothes, the two energetic dancers, the short man with the camera, the woman in the green dress.

You could watch this film two dozen times and still catch beautiful tiny moments. By the end of this first viewing, it felt like I finally grasped the rhythm of this Richard Scarry world, with my eyes going where Tati intended, catching one brilliant gag after another. It might sound like an exaggeration, but the final scene was so unexpected and pure, it brought tears to my eyes. Big fat tears.

My first experience with Jacques Tati, and I'm ready to move to Tativille. Get me a corner apartment with two big windows on adjoining sides and a reservation at the Royal Garden. I'll have the fish, seasoned beyond perfection.