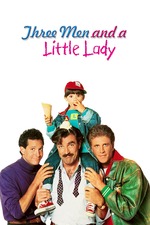 3 Men and a Little Lady

Here's the thing with Three Men and a Little Lady, it's a sequel that I've never seen before to a film that I like more than I should because of my childhood, so I didn't know exactly how I was going to feel about this one. The first one is kinda cute and is very enjoyable and this one surprisingly continues on that tone. It definitely isn't as good as the first one but I still found this enjoyable fluff.

Three Men and a Little Lady continues the story of the three bachelors from Three Men and a Baby (played by Tom Selleck, Steve Guttenberg and Ted Danson). A few years have passed and Mary (the baby) has grown up and is just about to start school. Peter (Selleck), Michael (Guttenberg) and Jack (Danson) are now living with Jack's ex-girlfriend and the mother of the baby Sylvia. They seem to be getting along great but Sylvia has a change of heart and suddenly wants to have a family of her self, she wants more children and to get married. She starts falling for the director of a play she's in and she moves to England with the baby. The bachelors aren't happy about this and decide to try and get them back.

This doesn't feel like a different movie from the first one, it's just continues and it does it well for the story. It starts off all good and entertaining, Selleck is the one stealing the show and having the most laughs, Guttenberg complains and Danson just feels left out. Then we get to England where the film changes and just feels like it got more stupid and a bit stereotypical of the English, it's just dumb. Ted Danson does have a really funny scene nearing the end and it makes up for him being left out the rest of the movie. Not as cute or as funny as the first but still quite enjoyable, if you liked the first one you'll probably think this isn't as good as the first one but you'll still have a laugh.