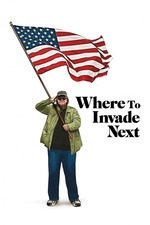 Where to Invade Next

Here's the thing with Where to Invade Next, it's the first Michael Moore film I've seen. I heard the stories about him and his works and how they can be quite controversial and I've always wanted to see some of his previous feature documentaries, especially since they're critically acclaimed, but I've just never gotten round to them. It was just by luck that his new film made its way to cinemas in my town (out of 4 only 1 cinema is showing it and in very limited release). Not only did I get to see Where to Invade Next but I also saw a Q&A with Michael Moore that was beamed to the cinema. The Q&A turned out to be nothing special but it was a very good extra to a very enjoyable and at times unbelievable documentary. I can't understand how I hadn't either seen or heard about half of the things that Moore uncovers here. I was laughing from sheer disbelief with what Moore finds in places like France, Italy and Norway. It's also a plus that I found Michael Moore's delivery and interviewing skills to be incredibly funny.

For years Michael Moore has delved into the bad things about America and showed a side of the country that many people hadn't seen before. Now though he wants to help his beloved country by invading other countries and stealing their incredible ideas in order to make America the best country in the world.

Michael Moore has an incredibly funny and likeable personality. He managed to carry the film throughout it's entirety by being genuinely interesting and feeling like he honestly wanted to get answers. This isn't a documentary in which there's a few facts here and a few facts there. There's a lot of deeper meanings and ideas that Moore wants audiences to take away with them. He's done his homework on these places and it shows as I found everything to be investigated thoroughly and I left feeling educated. I'm not going to go over what Moore finds out during his invasions (because some of them are so unbelievable that going in knowing absolutely nothing is the best way to watch it) but subjects include schools, holidays, prison and the price of college. The film does feel a lot longer than its actually on for. It's a pretty lengthy documentary at 2 hours but there's just so much information that it feels like 2 and a half at least. There is a light hearted feel to most of this movie as Moore's focus is solely on good ideas and how to help America. However, there are a few scenes which people will find dark, disturbing and shocking and they come in the form of news footage or security footage from America. These scenes are spliced incredibly into the film and adds depth to Moore's opinions and feelings. The message that the film ends on is really thought-provoking and shouldn't just be taken by Americans but by every single person. Where to Invade Next was a very interesting and funny time at the cinema. Constant information that shocked me left me intrigued throughout the runtime and I wasn't bothered by how long the film feels. Michael Moore does a good job in giving audiences the information along with commentary that made me chuckle and laugh.