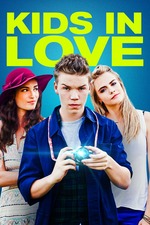 For his first full length feature, Chris Foggin conjures up a romantic indie which focuses primarily on spoilt and entitled but at the same time, fascinatingly alluring characters. Complimented by a hip soundtrack to suit the trendy locations on display in London and the crowd of youth for which the film focuses on primarily.

The grounding and relatable element comes in the form of Will Poulter’s naive but curious Jack, a young kid who is discreetly fed up with his frustratingly proper life. He has a chance encounter with a pretty French girl Evelyn, his infatuation with her unsurprisingly leads him astray and off course, both to repercussions good and bad.

The formula is basic and familiar but Kids in Love is a nice little coming of age flick, which offers a decent escape if you choose to commit to it fully.