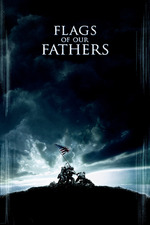 Watched as double feature with Letters from Iwo Jima (2006).

Clint Eastwood had dabbled in the war movie genre before with the seriously undercooked Heartbreak Ridge (1986), but returns to do things rather more properly in two back-to-back epics about the 1945 Battle of Iwo Jima. This first film focuses on the men of the United States Marine Corps and Navy trying to take the fortified Japanese island and raise the flag, as captured in one of the iconic photographs of World War Two. The movie also spends a lot of time considering what happened after the fighting ended, how the men (mis)identified as the raisers of the flag and therefore the heroes of the battle struggled with their new found, but ultimately fleeting celebrity. Some fame, but no fortune as it turned out. However this non-linear structure ends up working against the film, and as Eastwood is a very meat-and-potatoes director he would probably be advised to avoid such narrative adventurousness.

An example of this is how the movie tries to dig into the way America conducted the war as compared with her democratic allies. In countries such as the UK and Australia most of the wartime production effort involved nationalised industries, with the power of the state greatly expanding. While there was some of that in the US as well (after a decade of President Roosevelt's New Deal expansive government was nothing new), America unleashed the forces of capitalism and competition to produce the materiel needed to win in both the Pacific and in Europe. This had the additional benefit of finally shaking off the effects of the Great Depression as millions of new manufacturing jobs (particularly for African Americans and women) were created and corporate profits soared. (This was also the birth of the military-industrial complex.) However the film only flirts with examining the role rapacious American capitalism played in the war effort and some critiques of this, but then pulls back. I'm not blaming Eastwood's conservative Republicanism for this, rather I don't think the screenwriter was capable of fully engaging with this stuff: for example the movie suggests Uncle Sam was struggling raising money through war bonds, when actuality every bond drive was a smashing success, there was a real national will to chip in. So this distorting of history for contrived drama is more just typical Hollywood rather than anything ideological.

Far more successful are the battle sections of Flags of our Fathers. It really seems as if Eastwood was determined to out Saving Private Ryan Saving Private Ryan (1998) with his depiction of the slaughter on the beach. And then a lot of the rest of the movie plays out like a more competent and focused version of The Thin Red Line (1998). With Ryan Phillippe, Jesse Bradford and Paul Walker, there's a lot of late 90s teen heartthrobs trying to act like soldiers although they mostly succeed. Also he's not in it much, but Robert Patrick makes a welcome appearance as an officer. It's good he stands out because overall the characterisation is thin-to-absent. And as with Grand Torino (2008) the film does condemn racism in America, but only through the medium of many racist slurs, this time directed toward the Prima native Corporal Hays. Despite being now quite out of date (subsequent USMC research has determined that some of the individuals named here and in the book this film was based on, did not in fact raise the stars & stripes on Iwo Jima), Flags of Our Fathers is a decent war movie, albeit one bogged down with too much questionable epilogue and not enough character building. This sort of tale has been done better, for example in the TV series The Pacific, and indeed in Clint Eastwood's very next film.