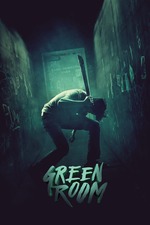 After really enjoying Blue Ruin (2013) and knowing the reputation this film had I was looking forward to Green Room. What a shame then that it turned out to be narratively incoherent, thematically lazy and for a horror film often quite boring and not scary. The setup is yet one more riff on George A. Romero's Night of the Living Dead (1968) and John Carpenter's Assault on Precinct 13 (1976), whereby an extreme contrivance has a left wing punk band being booked at a skinhead venue deep in the Oregon woods, but then things go badly and suddenly they're trapped with a lot of people wanting to kill them. Will the only two actually famous actors in the cast of potential victims survive the night? I guessed yes. Of course it seems that writer/director Jeremy Saulnier failed to learn the lesson that Messrs Romero and Carpenter so carefully taught: it's really important to make the audience care about the people surrounded by the murderous hordes, and it's not important to humanise said hordes. Instead he hurriedly throws down a few markers about the group, the Ain't Rights (shit name by the way), which mostly consist of "which would be your desert island band?" as a substitution for character, and then proceeded to lavish a lot of time on the complex hierarchies and interrelationships of the Neo-Nazi antagonists.

The leader of these is played by Patrick Stewart, and seeing him really voyage far outside his usual zone of wise mentors, Captain Picard/Professor X and himself is definitely the best thing about Green Room. There's also regular Saulnier player Macon Blair and a surprise appearance from Stephen Stills himself from Scott Pilgrim Versus the World (2010), Mark Webber. Still, other than Stewart these guys are almost interchangeable, and I'm not just talking about their fashion choices and haircuts. So when there was some "shocking" twists and side changing, well I wasn't gasping at the screen, more likely checking the time remaining. The film also massively misunderstands both the skinhead scene and doesn't seem to known what NSBM is (sounded more like death metal to me). So therefore Green Room joins 2019's Sound of Metal in perpetuating negative stereotypes about underground music. Normies really should stay out of these scenes, you can't discuss what you don't understand. Yes, it's a movie, but let me respond by stating the less verisimilitude the less the immersion. I'll also point out that most neo-Nazis are too unintelligent and unmotivated to run the sort of meticulous criminal enterprise featured here. That's why they're mostly found on the internet, because they're almost all lazy and stupid sacks of shit.

At moments and for some scenes the film does succeed in conjuring up an oppressive atmosphere of claustrophobic fear, but the clumsy writing and off pacing lets means this cannot be sustained. There's some nicely bloody kills judiciously used, and the title is about more than where bands chill out, as the whole film is drenched in a sickly green hue, like it's been mouldering away in the damp forest for years. Just like the metastasising racism and ultra-nationalism that always seems to seep back into the world despite periodic eradication efforts. So not a complete travesty, but more ill-used stereotypes and formula than fresh burst of artistic inspiration. Basically Green Room is VFW (2020) for Antifa, but at least that movie knew it was trash and embraced it. Don't look for any great depth here, to have that you first must have understanding.