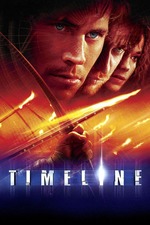 If this film had made a genuine effort not to suck it could have been at least interesting if not exactly "good", but it didn't, so it's not. I never thought I'd use the descriptor "the dumb version of Stargate" as it's not exactly as if Ronald Emmerich and Dean Devlin's 1994 ancient Egypt/ancient aliens nonsense is any sort of cinematic masterwork, but after sitting through Timeline you'll definitely feel like nominating Stargate for an Oscar. Mind you, this is an adaptation of a Michael Crichton potboiler, and that name is hardly a guarantor of quality; think less Jurassic Park (1993) and more Sphere (1998). There's Crichton's habitual sinister corporations messing around with science they don't fully understand or control (in this case time travel), and some placeholder characters who dash from hither to yon and contrivance to contrivance but never quite manage to outrun the holes in the plot.

Said sinister corporation is bankrolling an archeological dig in France led by Billy Connelly as Professor Johnston. He's joined by Gerard Butler and Frances O'Connor as his assistants André and Kate, and Paul Walker as Johnston Jr, a guy with no real interest in archaeology, but a great deal of interest in Kate. Now pause and think about that for a second, Connelly and Butler are both from around Glasgow so I'd totally buy Butler as Connelly's son, but no, he's da to Paul Walker, the most Californian guy or even entity that there is. Paul Walker couldn't be more California he was the offspring of an organic juice bar and a traffic jam that fucked atop the Hollywood sign. I've sampled quite a bit of Walker's work this year from the entire Fast Saga to early starring roles such as Tammy and the T-Rex (1994) to supporting bits such as Flags of our Fathers (2006) and my conclusion from all of this is, yeah, basically what you'd expect: more pretty boy than actor. I have no option but to conclude that for him Brian O'Conner was the part of a lifetime, it perfectly matched his limited skill set. Mercifully for his career 2003 also saw the release of the most underrated F&F film, 2 Fast 2 Furious, and that too is a sentiment rarely uttered.

Where was I? Oh yes, the sinister corporation as overseen by a slumming David Thewlis has opened a wormhole to 1357 in the middle of the Hundred Years War, and so after Professor Johnston disappears into that, it's his son, the important characters and a few redshirts (or perhaps, given their medieval garb, "redsmocks" would be a better description) mount a rescue mission into the past. Just as another aside, something I noted in my review of Green Room (2015), it's not a surprise when the no-names get offed, as Game of Thrones (should have) taught the masses, it's only shocking when an A-lister gets the chop early on, that sends the message that the threat is real. If you are confident all the stars will survive until the credits, you're already starting with a suspense deficit. Anyway, our 21st Century crew bumble around the 14th, not blending in at all, but mercifully everyone speaks modern English so there's no worries there. Apparently the book is a lot more careful in explaining the details of how this all might work, but the movie mentions a few rules and then just ignores them. Like I said at the top, no one was clearly that bothered about not sucking.

Timeline was directed by Richard Donner at the end and definite decline of his career, after this he'd only manage one final Bruce Willis movie (around the time Willis began to fade as a top box office draw) and a proto-Snyder Cut with a redo of 1980's Superman II. Donner was one of those surprisingly rare directors who worked in a number of different genres from horror with The Omen (1976), superheroes with the original Superman (1978), fantasy with Ladyhawke (1985), buddy cop action with Lethal Weapon (1987) to this science fiction guff, and there was plenty of assorted dramas and comedies in there also. Perhaps the downside of this and perhaps why most directors aren't so eclectic in the projects they take on, is that you can't really say there's anything that clearly delineates a Richard Donner movie (other than it featuring a lot of yelling), he adapts his style to the material rather than fits the material to a unique artistic vision. And so to reference Stanley Kubrick for the second review in a row, that's what elevates a true artist above a studio journeyman, a Kubrick film is always a Kubrick joint first and genre whatever second. Sorry, Richard.

Donner hasn't lost his touch completely, he stages the medieval combat scenes competently enough, using reenactors rather than just stuntmen and CGI, so that's good. And really most of the blame for how the picture turned out should go to Paramount boss Sherry Lansing (who has form when it comes to botching potentially good movies, see 1995's Jade) as she demanded multiple re-cuts, resulting in what was supposed to be Jerry Goldsmith's final score being scrapped, because he was sadly dying of cancer at the time, so Brian Tyler had to step in. One unintentionally funny thing about the film is that the characters really lean on the metaphor of faxes as a simile for how people and objects can be broken up into data, sent through the ether and reassembled at the other end. Almost everyone born this century has never used a fax, an increasing number have probably never heard of them, so within a few decades this key bit of exposition will either be incomprehensible or will require some research. Anyway, that's Timeline, an eminently skippable movie, but if you want to see a great film involving time travel between France in the Middle Ages and the modern world you simply must track down 1993's The Visitors.