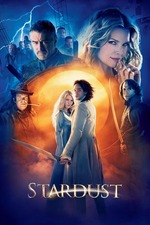 Where do I begin with this movie? Stardust is about a young man who wants to find a star and bring her back home with him to impress a girl and they learn how to love each other throughout the whole journey. I'm on the fence on this one whether it's going to be one of my new guilty pleasure movies or not. On one end I just love how ABSOLUTELY NOTHING makes sense in the movie and how entertaining it is but on the flip side ABSOLUTELY NOTHING makes sense and the campiness never takes that next step. There are times where the film definitely wants to be serious regarding emotion and there aren't enough goofy moments to balance that out.

The Pros: Most of the actors are really good. Robert De Niro, Mark Strong and Michelle Pfeiffer do a really good job. It's nice to see small roles for Ben Barnes or Henry Cavill in here. I really do enjoy the quirky campiness, I like how the ghost brothers operate as a sort of commentary for the film, they definitely should have been utilized more. I like the editing alot especially when it came to the moments of levity and comedy. I also like how the multiple storylines are juggled, adequate time is given to all parties which is appreciated.

The Cons: The script is at time pretty weak and actively manipulates the audience like when Yvaine asks where Tristan went but the bartender blatantly tells her the worst thing she can hear without implying that Tristan told him something else. Tristan himself isn't a weak character but he's pretty unlikable as you roll your eyes every scene he's in since he can't get the hint. I also think the ending goes a bit too long and the overall runtime could've been 15-20 minutes shorter.

In the end I'm hesitant to call this a so bad it's good sort of movie and I'd prefer to call it so bad it's entertaining. It knows what kind of movie it's trying to be and that's really all I can ask of it however it isn't a lightning in a bottle scenario where everything works uniquely and perfectly but it's a harmless FUN movie. Not sure who I would recommend this to, maybe your friend that says they like good writing but also thinks Disney makes good live action remakes, idk. This would be a fun drinking movie.

The Chronicles of Narnia: The Voyage of the…