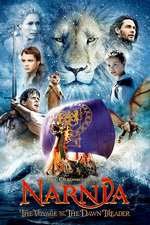 The Chronicles of Narnia: The Voyage of the…

The Chronicles of Narnia: The Voyage of the Dawn Treader 2010 ★½

The Chronicles of Narnia: The Voyage of the Dawn Treader is the 3rd film released in the Narnia film series and it centers around Edmund and Lucy returning to Narnia with their cousin Eustace to go on some seafaring adventure. If I’m being honest the downgrade is immeasurable and almost immediately noticeable. The film is a very loosely woven plot as it serves as an odyssey-like adventure as our characters island hop from one situation to the next.

The characters are nothing special or even interesting. Edmund regressed as a character as his arc centers around becoming a leader when he served that role quite effectively in the last film. Lucy’s arc is also kind of forced as she fears she’s living in the shadow of her sister when this wasn’t introduced in prior films and really just serves as a vehicle to keep Anna Popplewell in the movie. Eustace is abhorrent, one of the worst characters ever put to film. He goes through this redemption arc when he becomes a dragon but the problem is we separate Eustace from the dragon and it never feels like the two are one. The dragon doesn’t even act like Eustace, it’s not snobby, rude or holier than thou. Caspian is back and has completely switched accents for some reason. He has no point in being there other than to have conflict with Edmund and he’s even more of a grey blob than in this movies predecessor.

The fight cinematography is also really weak as oppose to last time, it’s super choppy as is the editing. I couldn’t help but feel like this movie was originally the same length as the other two but it was edited down to an hour 40.

The creature design is awful, the dufflepuds are one of the worst designs I’ve ever seen. Eustace as a dragon looks horrendous, in fact everything new looks awful. The only things that look decent is Reepicheep and Aslan.

Let’s tackle this laundry list of problems the movie has. The time between Narnia and the real world is all fucked up. The Pevensies leave Narnia when they’re about 20-30 and when they return no time has passed but when Edmund and Lucy return in this movie after some period of time only 3 years have passed? Why is Aslans table moving every movie? I can believe in Prince Caspian it was just turned into a tomb over time but now this time it’s on an island, they even point out the stone knife. Why did this movie insist on giving Edmund and Lucy Peter and Susans gifts, just allow them to become their own people. By giving them their siblings gifts it thematically doesn’t make sense since they’re trying to become their own people. Why do they always insist of bringing Lucy and Eustace along on every island when they’re the least useful people on this quest. Also there’s an island just called the dark island....I’m done.

What a waste of a good franchise. This whole movie put a really bad sour taste in my mouth that can’t be cleansed. The Chronicle of Narnia franchise started with such promise but wasn’t given the care, water and sunlight it needed to grow and flourish. This is the entire reason Disney is afraid of even going in a darker or more straightforward direction. At least we have the first one.

The Chronicles of Narnia: Prince Caspian