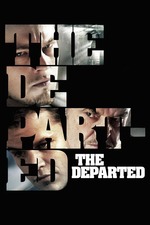 So The Departed was meh. Nothing to sing from the heavens as I’ve been led to believe but meh nonetheless. Really just an Americanized version of Infernal Affairs. I ended the movie liking it but the more I thought about everything the more upset and angry I got towards the writing. It centers around an undercover cop looking into Jack Nicholson’s character and a mole that Jack Nicholson’s character has inside the police department feeding them information.

The pacing felt out of whack in the first act as Billy is supposed to have spent 4 months in jail and it’s summed up in only 4 shots then another year under Costellos but it flys by very quickly and there’s hardly any in between scenes or shots to establish the passage of time. Direction is pretty good as well, anything Martin Scorsese directs is always fun, never boring, has some great music and a smart yet engaging aesthetic. It almost feels like this movie was an experimental phase for him as there are a lot of odd editing choices as oppose to his typical style.

The acting is great from everyone. Jack Nicholson, Leonardo DiCaprio, Matt Damon and Mark Wahlberg all bring it. No hard complaints there but I have some harsh things to say about the characters. Colin doesn’t do anything for like the first hour of the film and he doesn’t really come into play until about half way through the movie. I’m pretty hesitant to call him a protagonist since he’s quite the mixed bag, we don’t know why he falls under Costellos guise other than perhaps he’s missing a father figure but it’s incredibly vague and brushed under the rug. We don’t have a motivation for Colin to do anything he does in the film. There are hints that perhaps his motivation is financial but it isn’t clear. Madolyn is an extremely weak character. She has little to no impact on the plot and easily could have been written out of the movie. The film goes out of its way to hint at the idea that Colin is gay and therefor impotent, disinterested and pretending to be something he’s not, much resembling his role as a cop while he’s feeding Costello information. Billy’s character on the other hand also lacks motivation to do anything he’s doing throughout the film. It was hinted at in the original script that Costello is Billy’s godfather hence the relationship between Costello and Billy’s father but instead of providing the audience with this information the movie decides to just pretend like we know it already or worse continues without changing it. This is the entire reason why Costello would trust Billy blindly, why Billy was picked to go undercover when he got dragged out of the academy and the reason Billy has access to the lawyer in the third act. AND THEY LEFT IT OUT OF THE MOVIE.

Pretending the godfather plot point doesn’t exist, there’s no fucking way Costello would not know Billy is the rat. Costello and his crew blatantly acts dumb in some scenes so Billy can be allowed to remain a part of his crew and it’s one of the most blatant conveniences I’ve ever seen. I mean, you have an ex cop who only spends 4 months in the slammer, that ain’t trustworthy especially when you know there’s a mole in the crew. I get that Costello feels some type of way towards Billy due to his connection with his father but it’s not worth your criminal empire dude. The social security thing pisses me off. Costellos crew could have easily used fakes as oppose to nothing coming up for Billy. He only asks for it so Billy can find something that points to Colin as being a bad guy. In the beginning the stock footage shown is that of the Boston bussing crisis which doesn’t factor into the movie, plot or theme in ANY way. What is the point of the coke scene? How does some random druggie know that Costello is an FBI informant? How exactly did Costello plan to sink Colin if he died? It’s not like he would have known it was him who did it beforehand. Why does Madolyn act like she understands what’s going on in the tapes because she wasn’t involved in the rat arc at all. Why didn’t Billy just release the proof rather than try to arrest Colin? Why didn’t Billy just grab Dignam himself? Why didn’t Billy just contact Dignam rather than use him as his trump card after he died. In other words, Billy didn’t have to die.

The more I think about the movie the more frustrated I get. This is an all star cast with an all star director working with a sloppy ass script with some themes that give the impression it’s a work of art. I really wanted to love this movie, especially with how much praise I’ve heard from people but unfortunately the writing and the writing alone leaves the movie suffering a death by 1000 cuts.