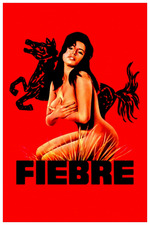 As strange as it is, Fiebre is also a perfect encapsulation of the appeal of the world Armando Bó and Isabel Sarli created together, because only in their hands could a movie about a woman in love with a horse feel so delightfully, absurdly naïve. Sarli's character, Sandra, found great, passionate love with José Maria (played by Bó himself, naturally), a man to whom she wasn't married, and who was killed by the intensity of their sex. Though before José died, Sandra had no interest in her arrogant, distant husband's racing stable, after his death, her love for José became bound up with her feelings for a Fiebre, a horse she watched being born shortly after losing her lover.

It's, again, an odd thing to say about a nudity-filled movie in which a woman uproots her life and follows a horse to the United States, but there's nothing at all dirty about Fiebre. Instead, it's just an examination of — perhaps even a tribute to — a woman and her devotion to the memory of a man, and the horse to which it is connected. (Yes, I laughed a little as I typed that.)

Underneath the film's intense commitment to its bizarre love story and the unending images of Sarli's magnificent, bare breasts, lies a quietly determined streak of feminism. Gently hounded by a devoted man who imagines love as a dreamy, gentle thing and desperately wants to marry her, for her part, Sandra professes a strikingly frank, proudly masculine view of the connection between the sexes, preferring aggressive, animalistic passion to commitment, love, and what her suitor dreamily calls "refinement." For Sandra, sex is about making the choice to be passive, in order to be taken by a virile man she desires. The simp who dogs her every step (eventually, he just gets her high in the hope she'll think he's a horse and finally fuck her) is nothing like what she wants, and even Fiebre's new vet, who understands Sandra's physical needs far better than her other suitor, wants to live with and marry her. Neither man is able to conceive of a relationship with a woman, no matter how unconventional, that doesn't involve declaration of love, cohabitation, and gentle, shared affection.

Ultimately, despite recognizing that, at least physically, she had something with the vet, Sandra turns her back on both men and all of their tired, traditional expectations, and leaves with Fiebre. It's a ridiculous ending to a ridiculous movie, but it also allows Sandra to be true to herself and what she wants, without bowing to either convention or propriety.

(For the record, though I saw more horse dick in this movie that I have in my entire life to this point, the closest Sandra gets to banging Fiebre is having sex with the vet very close to him. As far as we know, she and the horse don't have an actual sexual relationship. Which, yes, is the only time I've ever written that in a review.)

Also, look, a book! In English! About Sarli and Bó! Coming out in January! 🔥🔥🔥