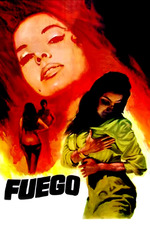 The first 30 minutes of Fuego are almost indescribably thrilling. Just a year or so after Carne, in which Isabel Sarli plays a character without agency, whose abused body exists only for the violent sexual pleasure of others, here we see her, as Laura, glorying in her own pleasure, and enjoying her own body. It's an incredible first act, full of almost nothing but sex, as Laura eagerly seeks to fulfill her voracious appetites. And director/partner (and, in this case, costar) Armado Bó shoots it all with appropriate awe, taking in not only Sarli's astounding body, but also the joy she finds in it, and celebrating the shamelessness of both Laura's desire and her pleasure.

The final hour, however, is a lot more difficult. In it, Laura marries a man she loves (played by Bó) but finds herself helpless before her insatiable sexual desire, needs which lead her to cheat on her husband with any number of strangers, as well as with her longtime lover and maid, a woman named Andrea (Alba Mujica) who Laura's husband calls "unnatural — strange." Laura's guilt over her repeated and uncontrollable infidelity leads her to believe that she should die, either by her own hand or that of her husband. In fact, begging him to kill her becomes a common, awful refrain in their relationship, and they struggle to cope with her desires and their consequences; the film's ending is both grim and darkly romantic.

Not surprisingly, my initial reaction to all of this is dismay. After all, it's entirely built around a woman's shame in her sexuality, and its condemnation by her community. In addition, Andrea is framed as obsessed, violent, and dangerous, qualities that literally only exist in the film in its lesbian character. Laura's agony over her insatiability and her constant, tearful pleas to be killed are devastating to watch, both because we care about the character (say what you want about Sarli as an actress, but she's staggeringly magnetic), and just because she's a woman whose society has taught to believe her sexuality makes her unworthy to live.

BUT! There is a reading of the film that is far more positive that mine. One in which Laura's immense power is celebrated, and is so all-encompassing that it works even from beyond the grave. One in which Laura's relationship with Andrea is not only a rejection of heteronormativity (in a society that had rarely if ever seen a lesbian relationship on screen before), but also a thumb in the eye of the mass of men who are unable to satisfy even this one woman. I'm not sure I can quite find my way to embracing this reading (yet), but it's challenging me in important ways, and reminding me that my personal vision of what empowered sexuality looks like for women isn't the only one.

Every time I read anything about Bó and Sarli, I adore them and their movies all the more. This lengthy 2010 interview with Sarli in Film Comment is fantastic, and here is a brief conversation between her and John Waters, in which she is, as you might expect, a goddess.