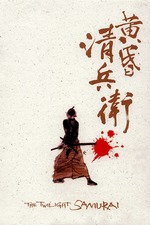 A low key story about a low ranking samurai's everyday struggles to keep food on the table for his poor family after his wife's death is a beautiful affair.
Growing up I had this glamorized vision of the life of a samurai, it seemed like the epitaph of cool. Yoyi Yamada shatters all my boyhood dreams you could say. But it's with a gentle touch.

The Twilight Samurai is about all the usual topics of the genre, but most of all about how a life so intertwined with upholding honor takes it's toll on all aspects of personal life as a result of sacrifices. The life of The Twilight Samurai should be a frustrating one, but he has such an honest outlook on life and is happy with what he's got as long as his daughters don't suffer.

Years of mundane everyday routine has blunted the combative side of his job, and herein lies the conflict of the story, leading up to a great final 30 mins including magnificent cinematography inside a house wich is the scene of the only real action of the film.

A true modern classic of the genre, and what a performance from Hiroyuki Sanada!