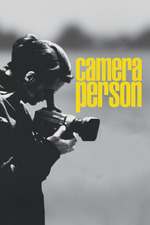 Memoir is perhaps my favorite genre in literature. Mary Karr, Nabokov, Bill Clegg, Michael Herr, Margo Jefferson are among my favorite writers because of the stories they've told about their own lives. Kirsten Johnson has more than earned her place on my list of favorite memoirs. The work she has done for 25 years as a documentary cinematographer, that stories she has witnessed, have become her story. Like Sarah Polley's Stories We Tell or even Casey Neistat's daily vlogging, Johnson's mastery is the result of her ability to capture moments in her life and then edit them together to create an engrossing story.

Cameraperson is, above all, art. It is also memoir. It contains political commentary, comparative and international. It has elements of philosophy. It contains far more critical thought than one might expect from a film created entirely out of b-footage from documentary film making. Editing, again, plays a huge role in its success. To create and advance a narrative, with distinct, but connected thoughts, out of disconnected footage, is an impressive feat.

The film ebbs and flows through different shooting experiences that Johnson has had. But a tying thread -- footage of her aging, ill, mother, her kids, her family -- brings Johnson into focus in a different way. A simple trick, but a meaningful one, Johnson shows throughout the film how she has been shaped by what she has seen and who she has been with.