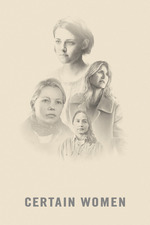 Kelly Reichardt made some aesthetic and artistic choices that portray the morality of this film. Her use of the entire screen, often filling only the top or bottom corners while leaving the rest full of space, especially at the beginning, situated us, the audience, in the Western context. A place like Montana is characterized by space, expanse, distance and grandeur. A less adept film-maker might've used plot or dialog to make that point. But Reichardt uses the frame. It's a powerful example of a director using everything in her toolbox to get the job done.

Similarly, there are many shots in the film that feature the main characters, women of middle-America, in quietness or stillness. There's a morality about their presence on screen. It's hard to describe, but it mirrors the morality we associate with the open prairie states of the West. An attitude that seems to suggest "we're here to do the hard work, we're not going to complain, we're not going to make a fuss of it, we're just going to do the work." There's something subversive about seeing women portrayed in this manner. This is usually a morality reserved for cowboys or ranch hands (which one of the best characters in the film is), but here it's present in every one of the main characters, the lawyer, the business-woman, the teacher.

And I suppose that's the morality that Reichardt finds most compelling as a working director in Hollywood today. She knows what she wants. She knows the people with whom she works best (in her Q&A after this film with Michelle Williams, it was clear the two share a warm, meaningful friendship). And she knows the kinds of characters she wants to depict on screen. Similar arguments have been made about other leading women on the national stage in recent months (I'm referring to Hillary Clinton, sorry to be obtuse). Maybe that's an important lesson to learn. That the women in leading roles in institutions from politics, to Hollywood, to characters on screen must have a pragmatic mentality. That this is the kind of morality that will help America transition to the kind of place where we have women in leadership roles, setting examples, and being embraced as role models. A kind of American morality we've seen for decades adopted by men. I imagine there's a rich feminist history of this, that I don't know much about, but it's a concept I find fascinating.

If I could've formulated a coherent thought about this after the film, I would've asked Reichardt and Williams. But I wonder if this is even something they've consciously considered. Or if it is the result of working hard, hustling and making successful careers for themselves as film-makers.