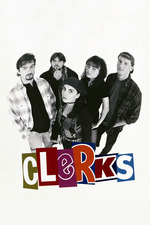 Clerks is a remarkable debut film. For all the work Kevin Smith has gone on to produce, I can't think of anything, save for maybe Dogma, that has the same originality, confidence, strength of voice, verve and joy as this film. Tarantino likes to say about his films, "I know this is a good film, because I would have fun watching it as a play, as a reading, or as a novel." Writers could benefit from aspiring to this sort of approach to their writing. If a story is good, it should be good in many media. Clerks strikes me as this type of a story. I could see myself enjoying it as a play, a series of short stories, a serialized TV show or a novel.

Smith's influences, including Jarmusch, Linkletter and Spike Lee are all present in this film but he never seems to be derivative of their work. Even his black&white photography is reminiscent of French new wave directors but never feels like it is ripping it off. Smith is able to turn his camera to a small location (largely filmed in a cramped convenient store and video store), film mostly dialog and little action but make an entertaining, even sometimes heartfelt, film about angst, ambition, friendship and love. It may be one of the better illustrations of the effect of suburban upbringing on a whole generation of Americans too.

The film suffers from plenty of flaws, almost all traceable to the fact that this is a first film for a new writer and director. But it hints a great promise, unfortunately largely unfulfilled since debut.