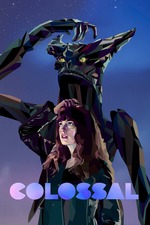 Before seeing this film, I read this spoilery review by Tyler Cowen. I'm not very spoiler sensitive so I don't mind reading things like this. And I have to say, it made the movie so much more fun to watch. If you're not spoiler-averse, continue reading.

In general, the argument he puts forward, is that Gloria is Hillary Clinton and Oscar is Donald Trump. And their personal battles, their domestic fighting, ends up threatening the world far away. The Korean kaiju, in our times, is the Japanese Godzilla in a previous nuclear age. The lack of personal responsibility from Oscar, instead of allowing Gloria to walk away, keeps pulling her back in.

This pre-text made an otherwise disjointed, slightly incoherent film, much more engaging. There were other themes, of course, that stand on their own, without the Hillary/Trump context. Gloria is a woman trying to live her life around men who have strong ideas about how she should live. Oscar is a man unable to deal with his wounds, lashing out at the world, at his friends, unwilling to let anyone in to help him. And then there's all the weird, interesting, kaiju stuff.

I ended up enjoying this movie. It is, though, more interesting than it is good.