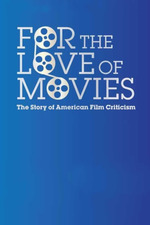 For the Love of Movies: The Story of…

For the Love of Movies: The Story of American Film Criticism 2009 ★★★

Good to learn about the history of criticism. I think it's clear that I could never be successful as a critic because I don't have the same competitive drive as Ebert, Siskel, Kael or Sarris. I'm totally fine with disagreeing with someone, finding their argument stupid or wrong and then moving on. I have enough anxieties in the world - changing someone's mind sounds exhausting.

I can't remember who said this in the film, but I do hate when I walk out of a movie and someone asks "so what did you think?" I don't know what I think until hours, days, weeks later when I have had time to write or to gain some emotional distance from what I just watched.

I also like Harry Knowles' (Aint It Cool founder) maxim that went something like, "if all critics have is critical thought, and if we spread criticism to everyone, then we're essentially spreading critical thought to everyone." Despite the fact that lower publishing costs, and the democratization of criticism hasn't proven to be a clear and indisputable panacea, I do like to think that the spread of critical thought is a benevolent outcome.