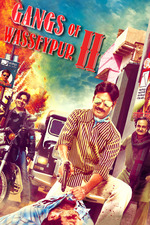 In all honesty, I really wasn't expecting part II to be a full step up from part I. But with excellent editing, remarkable action sequences, great acting, and tight plotting, part II really shines above and beyond part I.

Gangs of Wasseypur should absolutely be considered an epic. Not only because of its grand aims to tell a story spanning over 80 years, but because of its ability to capture life in India, especially the intersections of independence, development of civil society, effects of the Permit Raj, and interplay of state and federal politics, so well. Kashyap did not shy away from any part of this challenge. It takes immense talent to both build characters and get the audience to buy into their lives, their fears and dreams, while telling a larger story about human nature, society, governance and violence. Kashyap, masterfully, accomplished both.

My original question, though, from Part I, still remains unanswered. Why focus on a muslim family? I suppose the answer may be as simple as the fact that the town where this happened, the family on which it is based, was Muslim. But in a country with a long history of treating Muslims are hyper-violent, ill-fitting members of society, this question is worth asking.