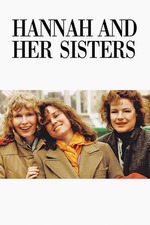 Hannah and Her Sisters

It took me a while to realize this about Woody Allen films, and Hannah and her Sisters' inclusion of Mia Farrow may have congealed the thought finally, but the way to understand the many films Woody Allen has made in the past decades is to realize each one is about him. Woody Allen, in his own acerbic, mumbling way, has accomplished what many writers and authors hope to accomplish - he has built an entire oeuvre out of nothing but his own life. An argument could be made, especially with films like Hannah, Annie Hall, Midnight in Paris and most recently Irrational Man, that every year or two Woody Allen writes and directs a film about himself and his life. A small percentage of people have ever written an autobiography or a memoir, let alone one every year.

Many writers, arguably every memoirist, have set out to create a work of art from their inner life. Woody Allen has accomplished this feat over and again, year after year. He writes characters that all sound, act, and live life like him. Every character in Hannah could be imagined to be a version of Allen. And although Allen remains entirely outside the film, despite playing a central character, if you take the sum total of the complications, behaviors and experiences of these characters, you might create a version pretty close to Woody Allen himself.

What's most important about this is that Allen has made an entire career of telling stories about his own life, some embellished, others more direct. Many writers I can think of would be very jealous of this accomplishment. To live a full and vibrant inner life, and then to make a living telling stories crafted from that inner life, well that's the goal isn't it?

Allen strays from this formula sometimes. This is when missteps in his filmography are clear. Films like Match Point come to mind. These leaps away from himself tend to fall flat, arguably because he's just not good when he's not writing about himself.

Without mentioning all the other accomplishments of Hannah and her Sisters (the role of music, Michael Caine's terrific performance, its depiction of gender and race in New York), the film and Woody Allen are impressive. One cannot be impressed with Woody Allen's writing without noting also that his inner life is full of some questionable details. But whose isn't?

O Brother, Where Art Thou?