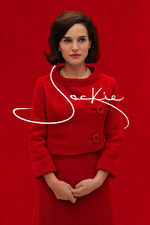 Pablo Larraín has accomplished a masterful feat, with the help of Natalie Portman. They have retold a story so familiar to us, but in a way that creates a new sculpture out of the same clay. As Matt Zoller Seitz writes over at rogerebert.com, there are two movies in this movie. One, about myth-making, personal ambition and maintenance of power in the face of adversity. The other, about a woman reluctantly shot into the national spotlight after the violent murder of her husband, working as hard as she can to keep composure, attend to her family, and avoid the undoing of her husband's legacy.

It is said sometimes, about films, that if something isn't on the page, it won't make it on to the screen. But Portman's acting is so good in this film, that we get a vocabulary entirely made of facial expressions, gestures, movements, and body composition that exceeds anything that could be written on a page. I haven't read the script, but I can only imagine the gap that exists between a scene that might say "Jackie, crying, removes blood from her face, cleans up before facing others on Air Force One" and how that scene actually plays in the film. All the additional meaning that is created is a credit to Portman's performance.

Ultimately this is a post-modern, aesthetically minded, biopic. It probably won't work for all audiences. But I found it a great exegesis of a myth that already exists in our heads.