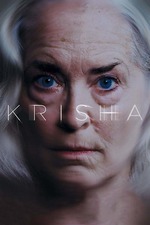 Krisha, the debut feature by Trey Edward Shults, which he wrote, directed and edited, is a remarkable first feature. His experience as an intern on some Terrence Mallick sets is apparent, if only in a few shots of the night sky in suburban Texas. In filming a chamber-piece-family-addiction-character-drama, Shults has added his voice to an exciting new crop of young directors on the festival circuit this year.

The lead performance, in fact all the performances (largely by family members, non-professional actors), are instrumental to the success of this film. Shults put a lot of trust into his actors and it paid off.

For me, the most impressive aspect of this film was that Shults mined his personal life for drama, and it resulted in a hyper-real, suspenseful, seemingly mundane, but in fact highly cinematic piece of art. Texans, like Shults and Linklater, it seems sure know how to make the mundane interesting. Maybe it's the vast expanses of space, and extra physical distance between people. They have to find ways to embed drama and intrigue where it's usually missing. There's not exactly a narrative here, not more than one you could summarize in a sentence or two. We mostly follow a compassionate author as he films a character sliding down a dangerous slope, and the family around her along for the ride. The raw, intimate, honest portrait we get in return is probably partially true of Shults' own life, but definitely true of the lives of many families dealing with each other around the world.

Hello, My Name Is Doris