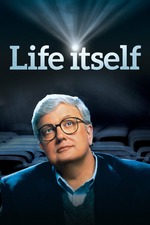 This film meant a lot to me, because Roger Ebert meant a lot to me. Ebert played a big role in getting me into cinema, into making films more than just entertainment or cultural currency. We also have some biographical similarities. I grew up in Central Illinois, attended the University of Illinois, went to University of Chicago for grad school and called Chicago home for a while. I've since departed, but still Chicago a big part of my identity.

When I saw Steve James, someone I admire a lot for both The Interrupters and Hoop Dreams, was tapped to make this film, I couldn't find my wallet fast enough to donate to the effort.

To Ebert, movies were empathy generating machines. To me, Ebert's writing and his contribution to bringing movies to the masses amplified that empathy far beyond its original reach.