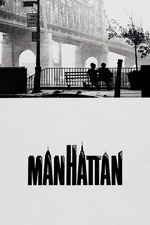 I revisited this film after a conversation with some friends about how I find it difficult to distance myself from Woody Allen's work because I enjoy it so much but I am conflicted about details of his personal life. This is an often discussed topic these days. From news about Bill Cosby, to R.Kelly, Roman Polanski, Woody Allen, it is hard to avoid the implicit choice I might be making in watching and enjoying the work of these artists. In the case of Cosby and Kelly, the 10s of women, the preponderance of evidence, make it easy to avoid their work and feel no remorse about it. Polanski and Allen are harder for me to reconcile. The fact that I have just drawn a line where black men are on one side and white men on the other, is also not lost on me.

It was in this context that I decided to re-watch MANHATTAN, possibly Allen's most personal film and one that puts this issue front and center. His relationship with Tracy is centrally featured in this film, and even in the time he spends with Mary, Tracy is somewhere on our minds. Because ultimately this movie is a quintessential American film, filled with anxiety about the past and future. Isaac (and us along with him) have a deep fear of missing out. Every character in this movie is anxious about what they may be missing out on. There's a disquiet in them all that perfectly reflects dating in New York (the same now as it was in the 70s, it seems), grabbing for status, unending ambition and all the things that are assigned to millennials now, but could be assigned to any set of Americans at any post-war time.

And it was while thinking all these things (and enjoying the beautiful film making, superb acting, deft directing) that I realized MANHATTAN, and Allen's work at large, isn't about his relationships with younger women. He dared us to focus on his relationship as a 42 year old with a high schooler, but instead pulled a magic trick while we were watching.

The central issue: can I enjoy an artist's work without implicitly condoning his/her bad behavior as a person, is still unsettled for me. I came to find the answer in this film, but it wasn't there. Instead, there's a beautiful story about love, loss, anxiety and being young in America.