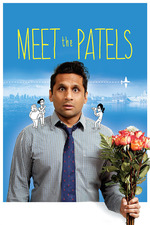 I saw Meet the Patels last week, but it has taken me a few days to get some emotional distance from it and write about it. On its face, Meet the Patels is funny, earnest, a new voice in a crowded space. It is made with shaky hands but steady voices. It is by and large an accurate account of growing up as an Indian American. It gets a lot of the details right, including the difficult emotional relationships some young Indian Americans have with their parents.

It is all these things, but for me, it was something else. It was a depiction of my life on screen. In particular, of parts of my life that aren't always funny and light. Marriage is a difficult topic in some Indian families. For some families, marriage is the institution responsible for keeping women in relationships they should have left long ago. For some families, marriage is the only topic of discussion, especially if you happen to be a son or daughter in your 20s, settled into the beginning of your career, and single. And for these 20-year-old sons and daughters, marriage becomes a weight that gets heavier and heavier with each year. The weight is exactly proportional to the amount of guilt sons and daughters feel for letting their parents down. Geeta, at one point, says that she realized it wasn't exactly because of her parents she felt this way, but I would argue that it was. If the signals she received from her family were love and acceptance, the weight of marriage would be lighter.

Marriage is an inevitability in Indian culture. It is the main institution through which all identities are formed. In a culture so defined by social relations, marriage is front and center, a gravity from which no one can escape. So when you take these cultural histories, and put them in America, a place with its own institutions with their own gravities, frictions are bound to happen. In America, a culture more interested in individual identities, marriage can easily be replaced by things like race, work, or politics. And this central conflict is present in Meet the Patels. Ravi and Geeta want to define themselves through their work, their friends, their communities, but they keep getting pulled back into the Indian marriage black hole.

In this way, I felt more kinship with Geeta and Audrey, than Ravi. That's a weird thing to say if you're a 27 year old Indian-American man, watching a 29 year old Indian-American man on screen. But I found more to connect with Geeta and Audrey, two women who were trying their best not to let marriage define them. They were swimming against the current, trying their best to pull away from the pull of marriage. Ravi, partly because of his own choice and partly because the pull of marriage had him rapt, spent many years thinking about and defining himself in relation to marriage. Where I am in life, right now, I don't feel connected to that approach.

In the end, their parents did come around to accepting Ravi and Geeta's identities. And that was heartening to see. I think most parents get their after some struggles. But some don't, some stay stubborn. If I could, I'd tell every father and mother to get there earlier, to default to giving their children love and acceptance. Love and acceptance shouldn't be contingent on something like marriage. It should come first, and marriage should flow from it, if it so happens.