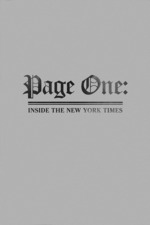 Page One: Inside the New York Times

I had never seen this documentary before. Watching it this week, after starting a new job in the newsroom at the Times and after David Carr's passing was pretty potent.

Carr takes this from what would've otherwise been a tick-tock of the inside of a massive machine, producing the daily miracle, and injects a deep, pulsing humanity into it. His relationship with younger reporters, the way he interacts with his editors, and how in turn his editors promote him to the masthead or defend him from outside pressure - that's what this documentary is about. I'm afraid that message gets lost at times in all the talk about the death of the newspaper.

A lot of things have changed in the last 5 years of course, the biggest being that the Times is not nearly as close to bankruptcy as it once was, but a lot still stays the same.

In the short 3 weeks that I've been at the Times, I've come to know one thing very clearly - the newsroom is as much about the relationships this documentary features as it is about the news produced every day.