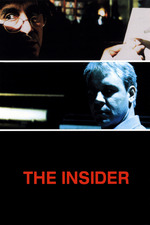 "Who are these people?"
"Ordinary people under extraordinary pressure, Mike. What the hell do you expect? Grace and consistency?"

As I did for my Spotlight review, I should state some of my biases at the outset. I care about journalism a lot. I work at the NYTimes, I love Spotlight and All the President's Men. I think investigative journalism is an incredibly important asset in a democratic society. With all this in mind, it may come as little surprise that I liked The Insider. Although released in 1999, I saw it for the first time as part of a Michael Mann retrospective at the Brooklyn Academy of Music this month.

The story, as explained in the end credits, and confirmed through some minimal reading about the events online after the film, is based on true events, but does not adhere to them entirely. This fact does not draw away from the film. Michael Mann centers this film around Al Pacino, who carries it well, and is a good balance to a neurotic and imperfect Russell Crowe.

One of the complaints I've heard about Spotlight, especially in discussions about its Best Picture chances, is that it was too much of an ensemble piece, without enough of an artistic ethos at its core to be considered a successful film. This is a valid criticism, especially in comparison to "artsier" films like The Revenant and Mad Max: Fury Road. The Insider shows what a docu-drama about journalism can do with an artistic director at the helm. I'm not convinced it does a better job of telling a story, or is more or less convincing as a film, just an interesting juxtaposition to the otherwise matter-of-fact, no-frills directing in Spotlight.

With this more stylistic take, Mann also chose to lay on a heavy score during a few emotionally important scenes in this film. That was a choice I could have done without.