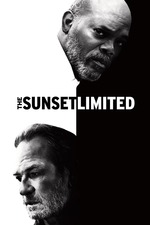 It's hard to pull off a strict play like this in a film medium. Tommy Lee Jones didn't try to flower it up as a director. He also played it pretty close to the chest as an actor. Sam Jackson, on the other hand, took it a little further with his acting. Although, subtlety and challenging mainstream conceptualizations of black men, is not Sam Jackson's strong suit.

The Sunset Limited showcases Cormack McCarthy's genius ability to take on deep, meaningful topics (like God, good and evil, jealousy, corruption, greed) and treat them in hyper personal ways. McCarthy's work has been adapted for the screen a few times now, but it took an equally strong cinematic voice (the Coen Brothers) to pull it off successfully in No Country for Old Men. Lesser directors like Ridley Scott, Tom Hillcoat and James Franco weren't able to adapt his words for the screen as well.

The Sunset Limited is a good progression of play adaptations, but earlier attempts like Waiting for Godot and Lumet's 12 Angry Men were bigger achievements in adapting a stage play for the screen.