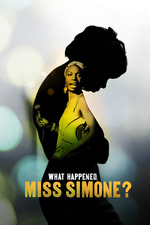 Her face: the documentary featured a lot of footage of Nina Simone performing. Her face was almost as enticing as her voice. Every performance could be summed up in a few facial gestures. Her face betrayed her mood, her attitude, her commitment to what she was singing about, or her complete disinterest in having to perform sometimes.

Her voice: what is voice? In basic terms, it's hot air and some energy created through constricting and releasing muscles. It can be described in very mechanical terms, rendering it sterile. But what came out of Nina Simone, disguised as her voice, was much more than this. Somewhere between the breath she inhaled and the words she sang, she infused something metaphysical. This last ingredient was patently hers. It was some parts pain, some parts anger, some parts love, some parts fear. This is the last ingredient that sent shivers up and down my body in the dark theater where I watched this film. This was her contribution to the world - the world of music, civil rights, pop culture and the world at large.

In the theater where I was watching this film, a woman was letting out audible sighs and affirmations when Nina Simone's life moved her. She was clearly affected by some of the civil rights era documentary. A man behind her kept shushing her. A few times he did this loudly. Then he took a swipe at her had, as if to slap her. She stood up, turned around and took a swing at him. A fight almost broke out. In the end they ended up sitting down and watching the rest of the movie instead of getting kicked out.

I couldn't help but reflect on the irony of a white man, paying money to go see a movie about a tortured, silenced black woman, only to do the same to a black woman in the theater with him.