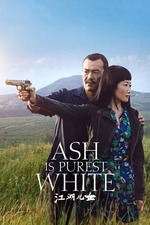 Begins with the blaring of a bus horn — which sounds a great deal like the sound that Platform ends with. This makes sense because these two are really sister films: Platform surveys the waning years of Maoism, from the late 70s to the early 90s, and Ash Is Purest White picks up right about where Platform left off, with footage shot around the same time that Jia made Unknown Pleasures. From here, Ash as well sprawls out across decades, collating Jia’s 2000s filmography (Unknown Pleasures and Still Life especially) and in the process negotiating a division not only in Chinese national identity, which has moved from collectivism to an emphasis on the indivial, but also Jia’s own cinema, which has transitioned from docu-realism to a more commercial mode of drama — in a way, representing the shift from socialism to capitalism. But whereas Jia’s two other most recent films didn’t necessarily feel self-aware in their commercial ambitions, or rather the way those ambitions were realized through State sponsorship, Ash confronts its own ‘political’ dualism, its commodified
modernity and its cultural traditionalism — narratively, formally, thematically. It’s Jia’s best, most expansive, and his most quixotic film.