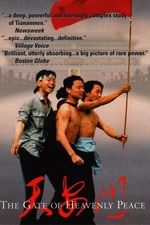 The Gate of Heavenly Peace

Second time through this three-hour behemoth by cinematographer/producer Richard Gordon and his frequent collaborator, Chinese-born documentarian Carma Hinton, who's the daughter of estimable Marxist author William Hinton (a contemporary of my own great, great uncle Edgar Snow, btw). And having now read a lot more of the work done on this period, from Chinese academics in particular, I'm much more prepared to identify the film as a suitably comprehensive and, on balance, fair account of the protest movement, its organization and factionalism, and of the competing voices that were vying for power and influence inside the government during the late reform era. Gordon and Hinton don't get everything right, including an unwillingness to interrogate the distorted portrayal of activist Chai Ling as a self-destructive extremist, but the multifacetedness of their narrative, the wealth of public figures it encompasses and investigates, and the political charge of the moment that's so palpably represented all resonate with such immense power due largely to the stark and disturbing contrast created by the deadening silence of the discourse that came after.

The Sky Is Clear and Blue Today