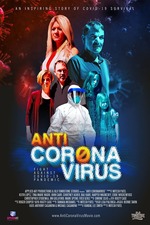 This is one of many indie features where reviewing it objectively means punching down. Way down. To the point where it almost isn’t fair to anyone who gave their all for this production. So allow me the following…

Anti Corona Virus — as an overall indie work — isn’t worth discussing the performances, the crafts, or any aspects at a critical level where you can really dig into it… because it hasn’t earned that level of discussion.  This is because the script and direction are simply uninspired and devoid of reality (not to mention full of howlers).

This was produced during the height of the shutdown in 2020, with apparently no sense of foresight.  Trying to be the first coronavirus feature out of the gate may have some marketing value, but considering the resulting (rushed) work was already so clearly out of touch with what was actually happening at the time of its production, there is no empowerment for anyone, cast or crew, to succeed.

The script — a real mess, more interested in bashing media rather than depicting anything resembling medical truths and actual human behavior — fails the entire cast and crew, rendering impossible the ability to judge any actual skills from anyone involved. That is, except for lack thereof from the writer and director.

What we get is a somewhat-irresponsible faith-based film claiming that… yes, Corona is real, but if you have enough faith, you can beat it. All while hardly anyone wears a mask… and with an epilogue spreading “hope” (actually, toxic positivity) about how many people had recovered by that point. At the time principal photography was completed, we had fewer than 200,000 deaths in the United States, and we were still in the period where people who weren’t emotionally equipped for the realities we were facing were still cling to recovery numbers, love of stock market, or simply denied the severity of the situation entirely.  At the time of this review, we’ve crossed 900,000 deaths, and are entering year three of this pandemic.

In other words, Anti Corona Virus is a self-righteous work that will continue aging very badly… somewhat like Reefer Madness, but not as fun… just a work totally out of touch before it even started shooting.  Perhaps a future RiffTrax episode?  Who knows?  But for now, a grotesque curio masquerading as a faith-based film of hope.

[Disclosure: I do know one of the cast members, who I like and respect, and find an engaging actor and human being.  Also, I used to live in Arizona, where this was produced. I’m a supporter of indie makers and their casts and crews, particularly when the works open doors for people seeking opportunity, and treat their casts and crews well. I don’t know the case here, but I hope the production was kinder than the result for everyone involved. I normally wouldn’t even write a review, if not for the potentially dangerous irresponsibility of the screenplay.  If the science in the movie is any indication, I legitimately worry about the health & safety measures taken during this shoot.]