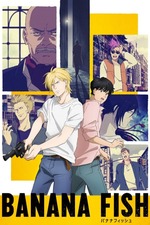 This is a tough one... considering that this came out and is really set in the 1980s, the anime adaptation just doesn't sit well with me as i find the story too outdated. i'm glad that original fans were able to see this animated, but yeah.. for the modern audience? nope not for me..

The main plot and romantic sub-plot was pretty shallow. i honestly couldn't even empathize for the main characters - their relationship felt super forced and unnatural. involved the repetitive, typical, and cringe hostage-savior scenario. a lot of characters lacked depth or were just poorly written. i cannot deal. it also strays away all the time from the main plot aka project banana fish?!?! i was really rooting for this at first, it had so much potential to be a mature take on drug / mafia wars. though it sheds light on underground issues, it doesn't necessarily correct it.

the ending is a product of external influences and personal history from the mangaka. for that, i respect the ending so much. if i had seen that without context from the whole series, i'd say that it really has the potential to be one of the best endings to a shoujo series. painful and poetic, but for what..

with that said, it's just your typical shoujo anime and if that's what you enjoy then by all means go ahead.. enjoy it as it is.

3/10 - because ash is pretty, bittersweet ending, and because the OST is really nice.